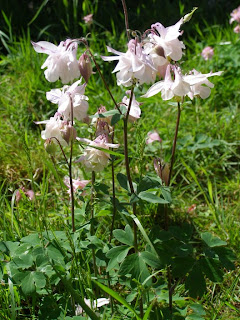 Some more mystery flowers have sprung up (doiiing!). I think the dark pink flowers belong to the same sort of plant, even though they appear to be trailing and the pale pink ones are more up right. Once again, these appeared in the middle of the grass, which we haven’t got round to cutting yet. There is a mower in the shed, but it is broken, so has gone on the list of things that need fixing, which is already as long as your arm (if you have really very long gangly arms).

We also have at least two nests of sparrows living in our roof, despite not having had a ceiling at the point they nested their. Noisy little buggers they are too.

Meanwhile, I have been sleeping lots, but we went out today with my folks to Ely. Ely is a pleasant little town in the middle of the very flat part of East Anglia. It is where Hereward the Wake held out against the Normans. Hereward the Wake is one of the characters who the Robin Hood myth may have been based on. 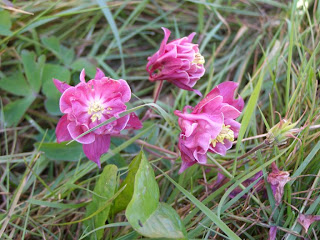 The only story I can remember about Hereward from School was that the Normans at one point hired a witch to curse the Saxons rebels during what had become a little guerilla war going on following the Norman conquest (it may be flat, but Ely was in fact an island at the time - we gradually drained the rivers to make the Fens; I'm not really sure why, but there is in fact a Drainage Museum, if you are interested). Anyhow, this witch performed her rite which cursed the rebels and concluded by turning round and mooning at them. Which provoked the Saxons to shoot her in the bum. There's a moral in that.

Perhaps more interesting was Hereward's mother - or who we suppose was his mother, British history of that period being a little shakey - Lady Godiva. I don't suppose she is that much more interesting, but she gives me an excuse to show you a rather lovely Pre-Raphaelite naked lady. 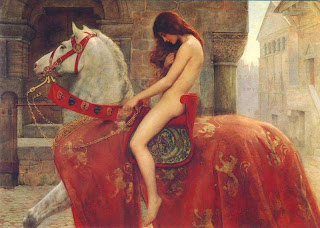 So the story went, Lady Godiva entreated her husband, a reputedly stingey git, to reduce taxes on the poor people of Coventry. He said, "Not on thine nelly, missus." (which is Old English). Then he said, "Tell thee what, I'll reduce ye olde taxes, if you ride ye olde gee-gee through ye olde streets of Coventry, naked."

So Lady Godiva asked the townspeople not to look and rode through the streets of Coventry in her birthday suit. Nobody looked except for a character called Peeping Tom - the fact his parents had christened their child Peeping suggesting little hope for him from the outset. Peeping Tom drilled a hole through his door, had a butcher's at Godiva and was struck instantly blind. Since then, anyone who drills holes through things to look at naked people is known as a Peeping Tom. 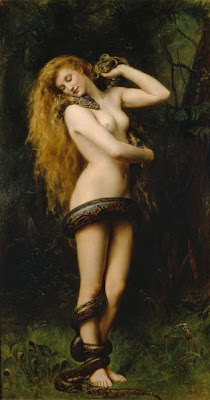 While I'm here, I am tempted to post that other famous John Collier nude, Lilith, who is a bit more womanly. Lilith was of course Adam's first wife, who was his equal. She got fed up and left Eden, thus they had to resort the spare rib arrangement. No, I've never really got to the bottom of what Lilith is about, where the idea of her came from, but as I understand it, it is kind of Jewish folklore (as opposed to Jewish doctrine) and she's kind of this vampire type character.

If anyone wishes to enlighten me, please do so. She was clearly an animal-lover, anyway.

Timbo is running Big Blogger 2007, so do check that out.

Following my Guide to Talking About Stuff Without Sounding Like A Racist, JackP at The Pickards (Me vs. Stephen Hawking being a particularly memorable BADD entry) has written about attitudes towards race and then disability in I'm not a racist, but...
Posted by The Goldfish at 6:45 PM

Email ThisBlogThis!Share to TwitterShare to FacebookShare to Pinterest
Labels: Art, Clicking, General Nonsense, Getting Out, History

Hi there! I run a blog about Ableism in Portugal (maybe one of the first in this country). I celebrated Blogging Against Disablism. It's a good cause.
http://ableismo.blogspot.com/

I was about to leap in with the name of the flower of which I, and many others probably, have lots because they self seed all over the place ... when bugger, the old brain let me down again. Anyway, I know it is called....... but I have forgotten the word (due, I hope, to brain fog not menopause).

Save the seeds when they have all dried out in, preferably, brown paper bags or even white paper envelopes, keep them dry and sprinkle them on SOIL (not grass) next March-ish, then you will have even more next year, and they won't get mowed over if AJ has shortened his arm.

Lots of sleep is lovely, hope that means you and your body are relatively well-ish and relaxed.

Yay for curvy beautiful women. Not sure I personally would wear a snake while posing for my picture though.

Columbines. They are lovely, and they self-seed and hybridize and generally behave like the nearly-wild things that they are. In this bit of North American you don't even need to save the seed, just let them go and they volunteer. I would see them growing along the trail when hiking in the Appalachian mountains and they inspired me to learn more about using native plants in the garden.

Lilith is midrash rather than torah--midrash being the supplementary tradition made up to explain the gaps in the main text of scripture (e.g., 'what is this "male and female he created them" doing there in Genesis before Eve comes along?'). Traditionally Lilith is sort of a demon, with roles as succubus and baby-stealer, but she's been reclaimed by Jewish feminists and there's even a magazine by that title. She got cast as a monster because she decided it was better to live free outside the garden rather than submit to Adam's rule in paradise.

I've been to Ely! It has a cathedral with an octagonal tower, and the father of someone I knew was serving in the clergy there in 1993--you know how it is when you're traveling, you wind up calling on tentative connections, but my visit was memorable, wound up talking to the friend's mother at length and also seeing the friend's brother graduate from a very old and ornate charity school.

My understanding of Anglican clergy was appalling for someone raised Episcopalian, so I'm not sure if the father was a verger or a vicar (I do know the difference now, but then all I could say is that they both started with "v"). Wouldn't a cathedral be more likely to have a verger?

Glad you're resting up.

I've always wondered if there was more to that Lady Godiva story than appears on the surface. Maybe it is a retelling of an old fertility ritual? Or maybe I just like to ponder naked women.

I have sung in Ely Cathedral !
Columbines, of course. Another folk name is 'Babies bonnets' I think.

Yep. Columbine, more properly known as aqualigia. Mine have still to blossom this year. they self-seed like mad, so if you don't get around to gathering the seeds later, don't worry.

Down this part of the world they are known as "grannys bonnets" tho' Ilve never seen an elderly lady wearing anything like them (except at Ascot).

They seem to interbreed the different colours, so you get all shades of blue, purple, pink & white changing every season.

The flower is called "Akelei" in German. During the Renaissance it was said to have aphrodisiac powers.

Yay! I have columbine, too. :) In addition to just letting them go to seed you can, if you feel like it and want to control where they come up, dig them up with a trowel (being careful of course to preserve as much of the root ball as possible) and plant them elsewhere. It'll take a season or so for them to establish themselves, but I've had a lot of success treating them that way; they seem to be coming up in very tidy and robust little clumps, now.

I always call them aqualegia --- one of my favourite flowers because of their delicate shapes and all the lovely colours they come in.

Wow - half these comments didn't come through my e-mail, so I only saw them today, sorry!

S. - It's a small world! A verger is a lay person who looks after things, so wouldn't, for example, conduct a service. Vicars work in cathedrals, but usually there is a bishop attached to it too. No, I'm a bit confused myself, but thanks for the information on Lilith. :-)

Hmm, I've heard of aquilegia, and yes, they are apparently the same as columbines, which I hadn't heard of. Thanks everybody, sorry it took so long to respond.

Well, it's your fault. You put the song in my head in the first place with your Lady Godiva passing by thing.