I decided to write about this, since it is such a big story both in terms of Disability and The Arts.

Trafalgar Square, as you really ought to know, was built to commemorate our victory over the French in the Battle of Trafalgar. The Square was to display statues of five British heroes;

Lord Nelson (whose column stands in the centre)

Henry Havelock and Charles James Napier (two random military bigwigs, nothing to do with Trafalgar, but they were involved in various conquests in Pakistan and India)

George IV (the most unpopular monarch since Richard III, but King at the time of Trafalgar)

William IV (the most unheard-of monarch since King Gerald-The-Pepperpot, but coming to the throne when Trafalgar Square was close to completion)

Actually, I have a great affection for William IV or “Sailor Bill” because he sounds like a jolly decent chap and is the one that everyone forgets when they recite the Kings and Queens of England since 1066. But alas funding ran out and his statue was never completed. So the fourth plinth stood empty for a hundred and fifty years. 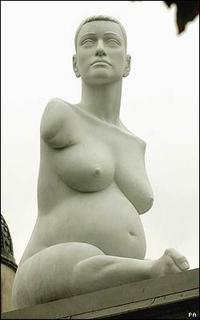 Since 1999, the Royal Society of the Arts has been commissioning contemporary work to occupy this space, usually for a year or eighteen months. Contemporary art is and always has been controversial; it is the nature of the beast. But few people are criticising the lasted work, a sculpture reminiscent of the Classical style, for it’s artistic value.

This sculpture is of Allison Lapper, a modern artist by another artist Marc Quinn. People feel scandalised by this statue because:


This is also the first time that a human statue has been on the Fourth Plinth, so another argument goes that, in the spirit of the Square, we ought to have a national hero up there. Like who? Well, a war hero of course! War…. Hero…. Well the only person I can think of who has come out of conflict in a good light during my lifetime is Simon Weston. Of course he’s disabled too and not nearly so pretty as Ms Lapper.

Now, if this was to be installed permanently, I think we’d have to think very hard about it, but for an eighteen month period? How can anyone argue against it? It makes an excellent choice on account of the fact;

Goldfish : Someone suggested a statue of Nelson Mandela. I mean, he’s not British but he is an international hero and the fourth plinth is right outside South Africa House.
[...] : Yeah, but that would be terribly provocative.
Goldfish : Who to?
[...] : The South Africans
Goldfish: Why?
[...] : Well they’re not going to want a statue of Nelson Mandela sitting outside their embassy.
Goldfish: Why not? They did elect him president and everything.
[...] : Did they?
Goldfish: Yeah, ’cause like, Apartheid’s over now.
[...] :Oh right. Well then yeah, that’s a good idea I suppose.

Do you think I should bother telling him about the Berlin Wall as well?
Posted by The Goldfish at 6:10 AM

Lady Bracknell assumes that it can only be the Goldfish's multiple charms which are preventing her Signficant Other from keeping abreast of current (or, in this case, really not very current at all) affairs.

In Lady Bracknell's youth, it was the responsibility of the man of the house to ponder on serious matters, while his good lady wife bothered her pretty little head only with trifles such as hair ribbons and trimmings for hats.

Much though Lady Bracknell pines for the excellent manners and slower pace of life of her youth, she cannot find it in her heart to regret the elevation of women to a position of intellectual equality with men. In her opinion, the superiority of the male intellect has been generally over-rated for centuries. Largely by men themselves, strangely...

I have to say...that is a beautiful image...

just the affirming sort of thing I needed to see today.

Are you in the country where the statue was made? If so, would you be willing to write an article about for the magazine http://www.audacitymagazine.com ?
Please let me know.

I'm interested to hear that you're so keen on William IV. For years he lived with, and had 10 children with, Dora Jordan. Dora, as a well-known actress of the day, was also a working mother. When William realised that it was likely that he'd inherit the throne he buzzed off and married someone else. Dora died in poverty. I too love the statue of Alison. When the fourth plinth was errected they couldn't have know that Alison was going to come along. Surely it would have been a better plan to put up a statue of Dora rather than William?

I didn't know that about William IV, Janet. All I knew was that he was a somewhat reluctant monarch and that during his reign there were some very important democratic reforms. Perhaps my affections were misplaced, having only read about his life from one, evidently santitised, perspective.

Dora Jordan sounds like an excellent candidate for the fourth plinth. :-)