This will make you cry

I might cry because something is sad, because it is happy or because it is beautiful, I cry when I try and talk about deep emotions, even (especially) entirely positive ones. And I hate it. I hate crying. Of course, I'd much rather cry than vomit - vomiting is physically painful, messy and smells bad - but crying is similarly uncontrollable, exhausting and demoralising. You don't want other people see you do it.

Worse is that most people only cry when they're really very upset. There are people I have known all my life who I have only seen cry once or twice. So it's natural to assume that a crying person is extremely distressed. Which can either make people feel anxious or guilty, or, sometimes, irritated.


Have your tissues at the ready.

I can't stand others telling me when I should or shouldn't be moved to tears except that, my heart hardened by indignation, it makes it less likely I will.

This household is obsessed with Strictly Come Dancing. Four of us sit down together and watch Strictly: It Takes Two every weekday evening, as well as the weekend shows. Every Monday, Zoe Ball interviews the dancing pair who have been eliminated at the weekend and she always tells us, averaging about ten times, that we're all going to cry. The dancers will cry. She will cry. The viewers at home will cry. Sometimes, she just talks about the urgent need for tissues, which makes the whole thing sound a bit disgusting, like everyone is about to leak or spurt in unexpected ways.

Rarely, does anybody cry. It happens occasionally, when people talk about the things that matter; the intense physical and emotional experience of learning to dance, the friendships formed, the art created. Ball thrusts a glittery box of tissues in their face as they speak, feeling the need to dramatise and glamourise something simple and human. She is the sort of person who uses hashtags in spoken language.

On-line people often precis a link with "This will make you cry."  This could be anything from a story about child soldiers in the Congo to a video of a puppy opening its eyes for the first time or the John Lewis Christmas Ad. And it's okay if any of these things do make you cry. But it's okay if they don't.

In fact, a story about child soldiers in the Congo, which is a really really terrible thing, might be less likely to make you cry. Just like the problems of our own lives, we can be numbed by our strength of feeling. We see a real-life problem as complex, and our brains are too busy trying to understand what's gone wrong and how it might be made better. This is why we can face serious illness, loss and bereavement and not cry for a good long while, if indeed ever. Or burst into tears on the spot. Complex situations provoke varied responses. All of them are legitimate.


"A mermaid has no tears, therefore she suffers more."

I have empathy issues. If I see you cry, I will probably cry. Watching TV, I will cry over a cake that's failed to rise if the person baking it is moved to. If I see you laugh sincerely, I will laugh without knowing why. If there's a crowd scene in a film when everyone is cheering for the evil tyrant, I will want to cheer, even though it is for the evil tyrant*. If I see a person or animal get injured, I can flinch so violently that I might injure myself. Increased empathy is among the stranger long-term side effects of dihydrocodeine.

(The only thing I don't copy from other people is yawning. That one's broken. I could sit in a room full of yawners, during a lecture on the contagious power of yawning and I wouldn't yawn. Odd.)


So much of our media-saturated culture would teach us that depth of feeling, and displays of feeling, are what counts. Last week's Children in Need is a good example. During the week, the British public gave £30 million to the Disasters Emergency Committee Appeal for the Philippines, on the strength of news reports (including reports like one I saw on the BBC, which amounted to "The trouble with Johnny Foreigner is that he can't queue in an orderly fashion, and that's why he gets into this kind of fix.")

No need for vicars in bathtubs of baked beans or moving VTs with soft focus wheelchairs and tragic music. On Friday, the British public gave about the same amount (£31 million) to Children in Need. But telethons are not really about raising money. They are about making people feel good - or specifically, making people feel like good people. The programming is designed like the most manipulative rousing sermon, with a mixture of spiritual highs (Yeah, we're really making a difference!), interspersed with deeply moving VTs about how tragic life is for the children - often disabled children or the children of disabled people (a tragedy that has nothing to do with say, the current political climate, cuts to care and services, welfare reform etc..).

Crying is a weapon of the passive aggressive. When people troll with feminine identities, they often claim to be driven to tears by the words of others. "After I read what you wrote, I cried for a whole hour!"

People do make each other cry on-line. Some people say horrible personal and insulting things. But what does the mere fact of tears indicate? If I cry and you don't, does that mean my pain is greater than yours, that your words have proven more hurtful than mine? And if - as is usually the case - we started off by arguing about a point of fact, do my tears mean that I win?

I think of White Woman's Tears; the use of hurt feelings by white women to silence black women, which often works because white women are seen as more feminine and crying - literally or figuratively - as a display of soft and gooey-hearted feminine sensitivity. Like when folk talk of sadness that Lily Allen should be met with criticism by those bullying all-powerful black ladies, when she's made such a sweet satirical video.

(This is the way my mind works. I don't experience white guilt when I cry, but you know, I think about social justice a lot.)

I learnt to cry on demand as a stagestruck teenager, just as I learnt to fall to the ground without hurting myself (a skill that doesn't transfer to trips, falls and faints that aren't written into stage directions). The only time that's been useful has been during depression or bereavement, when tears are ironically unforthcoming, but I've really wanted to, needed to cry. Tears help to carry cortisone out of the body. I concede they have their uses, on occasion.

Obviously, you need to think of something sad. An appropriately sad thing might not be a real and seriously sad thing, like a personal bereavement - it has to be simpler than that, and less personal. Events from fiction, especially uncomplicated events, such as from children's books and films, especially things that stirred you early on. The death of Bambi's mother would work for a lot of us. The bit when Hazel realises he doesn't need his body any more at the end of Watership Down (here I go again). 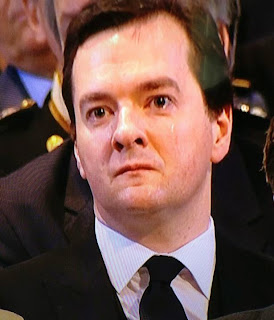 After that you have to stop blinking. It helps to keep a light source in your line of vision - not to stare directly at a bright light, but to make sure you're half-turned toward a lamp, window, TV or computer screen. So your eyes are irritated.

You can sometimes tell when someone is making themselves cry. If you cry naturally, you usually lower your eyes (unless you're trying to talk to someone), you look away from the light and you blink much more than usual as your eyes attempt to rid themselves of the excess fluid. When George Osbourne was photographed crying at Thatcher's funeral, his head was up, eyes wide open and his face was turned slightly towards the light. Also, there's surely the face of a man with The Animals of Farthing Wood on his mind.

Last week we watched the movie of Les Miserables. I've known this music since I was eight or nine years old, and saw the stage show when I was seventeen, one of only two big shows I've ever seen (the other was Fame. It wasn't great.). The film is superb but I would have hated to sit through it in a public place. I had five separate bouts of crying.  Still, far more satisfying that my tears for the sacharine sad moments in even terrible films. I really do cry at the John Lewis Christmas Ad, despite it being twee and dreadful.

Some people seem to like crying, like Zoe Ball, and folks who chose to watch movies because they will make them cry. This isn't, I think, the paradox of tragedy - a weepy film or book doesn't need to involve hubris and might even have a happy ending. I think it is perhaps about bonding through tears. In tragedy, there is catharsis. In weepies, the emotional tank simply fills to overflowing and even if you watch them alone, you know that you feel as you're supposed to feel; you feel as the characters feel. If you're with other people, you feel as they feel. You cry together.

And I guess that's what folk are after when the tell us "This will make you cry."

They mean to say, "Feel as I feel. Cry with me"


* Stephen read this and said, "Be honest, you don't just want to cheer - you do cheer for the evil tyrant."
It's true. I avoid seeing any footage of the Nuremberg Rallies around people who don't know me extremely well.
Posted by The Goldfish at 2:56 PM