The Myth of Monetary Meritocracy

I am afraid I have unpopular thoughts about the Credit Crunch. Well, the crunchiness may have passed; the BBC News website renamed the crisis a Downturn and even had a snazzy logo to accompany related stories (although they appear to have abandoned this). Meanwhile, back in October, Radio 4 had a season of programmes about the Credit Crash. Generally a crunch comes just after a crash. For example, if you fell against a stack of cereal boxes in the supermarket, it would kind of go crash and then crunch in quick succession.

For the UK at least, it is more of a Credit Crumble. It is undoubtedly bad news but for the time being it has been blown out of all proportion, with all manner of chaos, panic and disaster headlines when nobody is in mortal danger. We are poorer than most people, and whilst we're certainly aware of the increasing cost of fuel and food, there is significant room for further economy. It did tickle me the other week when a shop-assistant made me aware of a multi-buy offer on kitchen roll, saying in the gravest of tones,

Which is rather melodramatic coming from someone who takes no more than three minutes to earn such a princely sum*.

But all this has got me thinking about our ridiculous attitude towards money – an attitude which caused this problem in the first place and is going to make it all the more painful. Yeah, it's that kind of monster of a post, but if you make it to the bottom, you can have a picture of a terrapin!

The trouble is that we believe that money should be fair. It can't be. Money is just numbers. In this economy, these numbers are regulated by almost entirely by supply and demand (capitalism). Supply and demand are not fair.

Something you are going to sell to someone else – whether it is a thing or some work you can do – is only ever worth what somebody else is prepared to pay for it. Whilst hard work, skills, talent, intelligence, charm and cunning may increase the price you are paid, your control over the matter is very limited. If you are a brilliant footballer who gets all the right breaks, then you can make millions of pounds and compare your working conditions to slavery.

But most people who are brilliant at football never get to play for money. If you are a brilliant car mechanic or a fantastic florist, then there is a fairly modest upper limit on how much money you can make. This blog is not worth any money, and yet is infinitely more valuable than the work of certain newspaper collumnists who get paid a small fortune. Much fewer people read here, but much more charming, more discerning and generally better-looking people, which is a far more valuable reward.

A person cannot work themselves rich. Some people are smart, skilled and/ or work very very hard and accumulate massive wealth, but only if what they have to supply happens to meet a demand – that is, they get lucky. Most rich people were born rich. Meanwhile, most talented, hard-working, brilliant people are on average incomes, at risk of hardship should they fall upon bad luck such as unemployment or ill health. And thus a proportion of the most talented, hard-working and brilliant people are relatively poor.

But capitalism is not a bad thing. Financial inequity is not the same as social inequality. In order to make sure of this, we have things like a minimum wage, universal healthcare, education and the welfare state. We have certain controls on financial activity and the amount of social and political power that money can buy. And fortunately, once you don't have to worry about a roof over your head, having enough to eat and a little to spare, money doesn't make a great deal of difference to one's happiness. Work (renumerative or otherwise) has its own rewards. And our value as human beings has absolutely nothing to do with the money in our pockets.

The trouble is that most people don't believe this. Not truly.

Our particular cultural work-ethic is highly individualistic, based on personal economic reward. A good job is first and foremost a well-paid job. People have some choice about the work they do and some make altruistic choices, but principly, the purpose of work in our culture to provide for oneself or one's immediate family, for one's own independence, security and happiness. These things, we are told can be bought – a principle we have reiterated several times a day. Everything is for sale; in any given ad-break we are sold sexual attractiveness, physical wellbeing, a happy family and the envy of our peers, all in the form of yoghurt or soap powder.

Stuff being the principle reward in life, it would make sense if people were rewarded according to their virtues. And we would very much like to believe this. Certainly most governments sell us economic meritocracy because it puts everyone in our place; those men have power and earn many times the average wage because they are the very best people for the job – you are relatively powerless and poo because you're not so bright and didn't work as hard as they did. And look at the chav thing; people love the idea of an underclass of people who are in the gutter because of their own personal failings – and love to hate them because even though they remain poor, they do appear to have a lot more stuff than they deserve.**

And this has ruined our economy. The first effect is (or at least was) hubris in the face of short-term prosperity. During the boom, those who were doing well thought they'd earnt it. Home-oweners spoke about the artificial rise in house-prices as if this was something they had achieved through hard work – and something for keeps, which of course it wasn't. Meanwhile, in the City, people were making money in all manner of strange and inventive ways and oh, how very well they were rewarded!

If you believe that your wealth is a product of natural justice, then it is difficult to conceive of it ever going away. I am not going to work any less hard in the future, so I shall always be this wealthy. In the context of reduced financial regulation and a sustained economic boom (so sustained that many young city types had never known any different), this got completely out of hand.

The second effect is that most ordinary people, most of the time, don't actually perceive that they are doing well at all. Most people you speak to will complain that they are either underpaid, or that they might have enough coming in but they pay too much tax.

This is not greed. Surrounded by messages which say that the accumulation of stuff is the reward for virtue and the thing that's going to make you happy, respectable, secure and so on, you're bound to feel short-changed. You're smart and you work very hard, so why shouldn't you have all the shiny things you want – shiny things that far less smart, less hard-working people seem to have?

In this culture people who have no problem paying for essentials nevertheless become very frustrated with financial limitations. One friend recently complained that there is no state help for people like her, because benefits and tax-credits are means-tested according to your income and don't take into account how much money you have going out. Yeah, I know. And yet I sympathise; she works very hard, and only wants decent things. A decent house in a decent area, a decent car, decent holidays, decent technology. Since this standard of living is a struggle, she feels like she's going without.

Add cheap credit into the equation, and an enormous personal debt problem results. I don't work or own property, and yet even I was receiving offers of thousands of pounds in loans. Treat yourself, the literature said, give yourself the break that you deserve.

Now, I don't believe that people need protecting from themselves, ought not to be loaned money or subjected to advertising. I think people who have borrowed beyond their means for non-emergency purposes are responsible for their choices. Not that they need berating; it'll be tough enough as it is just now and anyway, some degree of luck is always involved. Some first-time buyers got 125% mortages – which seems ludicrous - but others in their peer group got help from Mummy and Daddy and hardly took on any burden at all.

However, we are all free to reject this culture. For our own sake, for the sake of an economy which impacts on everyone, and for the sake of the environment. Money is not moral. The consequences of our attitude towards it are. 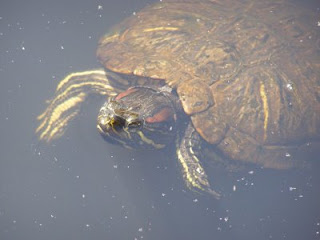 
* In fairness, I was buying kitchen roll in Poundstretcher, conscious that I was paying 0.4p a sheet – closer to 0.3p with the special offer, as opposed to 0.5p a sheet in Wilkinsons and a shocking 0.7p a sheet in Tesco. In case you wondered (I'm pretty sure you didn't), if you take absorbency into account, Wilkinsons is the best value – it is about the same quality as Tesco, whereas the Poundstretcher stuff is very thin. I hope this confession mitigates for any degree of sanctimony above... and it takes two minutes and four seconds to earn 19p on the UK minimum wage – a few seconds longer after tax.

** Meanwhile, we participate in the exploitation of the poor in other countries and use more than our fair share of the planet's resources because we don't really believe that the world could be as extraordinarily unfair as it is – but that's another subject.
Posted by The Goldfish at 2:06 PM

http://chargingahead.blogspot.com/
well I tried a reply, may still redo it but basically a semi complete lack of money seems to add great Adventure to Life and Great Jealousy from those who seemingly cannot live without great amounts of money and cannot handle one being able to!

word verification is menest, is that sexist? nope try ranream

THIS is why I read your blog!! Spot on Goldfish!