The thing about the dresses that come into the shops at this time of year is that, even if you hate everything that's fashionable in any given season, these dresses are always lovely. It's always the most gorgeous fabrics; velvet, satin, chiffon and tafeeta and despite the permanent prominence of black, those that come in colour are usually very nice deep colours. And they're always the nicest shapes, effectively gift-wrapping that most beautiful form in all of nature, the adult woman. Well, it is true.

I guess this is more about aesthetics (or possibly lechery) than some girly thing about dressing up; I have never been invited to anywhere where I might require a dress anything like these. If I were, I would find more fault with them. For one thing, I am an odd shape and don't usually fit into dresses. They are all incredibly skimpy given that it's winter, this is Britain and women tend to feel the cold more than. None of the dresses are fair trade or made from recycled materials and despite their expense they are the sort of thing which one wears very rarely, perhaps only once – and needs shoes and things to match, and don't get me started on the sheer hell that is shoe-shopping. If I were in the market, I'd probably make one myself. Out of an old sack.

In fact, I'm not sure quite who it is who wears the dresses that come into the shops about now. Most women never need a dress like this - I reckon that the sort of Christmas parties where women were posh frocks only happen in movies or perhaps for Office Parties if you worked in a really swanky office where they had mahogany desks and lead crystal mousemats or something. British high schools have started having “proms” in the last few years, but I think that happens in the summer.

My sister is the one person I know who owns these sorts of dresses, but then she goes to lots of weird weddings (you know, the sort that don't have a pirate theme) and does lots of concerts in orchestras where the chaps dress up like penguins – I don't think the audiences dress up so much. However, the one time I did go shopping for dresses with her was incredible; at one shop they gave me a cup of coffee while she tried something on. Free! Although at the end of that trip, we found the perfect item, full length, bright red and extremely flouncy, for £5 in a charity shop.

Anyway, since my futile and frankly slightly shameful window-shopping is usually conducted at home by myself, and since there is a very small chance that someone reading this might want to buy a dress this year, I thought I should share with you the top three dresses that I have seen this year.

3. This one I like because it is a great curvy shape (too many o 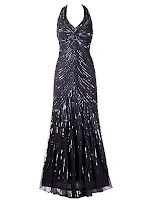 f these dresses require the wearer to be stick-thin). It is also almost black (it's described as graphite) and therefore fairly safe, also sparkly so one isn't a dark mass from the neck down. And the sparkly balance is just right; a lot of sequined dresses may be dazzling to behold, but make a person look like they put on their chainmail but forgot the suit of armour. It is from John Lewis and is called an Elise dress, like the car or whoever Beethoven wrote that tune für... 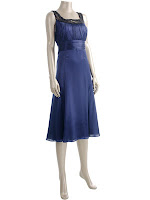 2. This is my second favourite mostly because it is a very nice colour and it is has a very pretty neckline (I'd be such a good fashion writer, all so very very nice). Also it is called a Boudicea Dress for reasons I can barely fathom, and I like the idea of a woman who was glamorous enough to wear such a dress turning up at her party in a chariot. It is from Monsoon.

1. This is my most favourite, because despite everything I said, I guess I imagine this might suit me if my fairy godmother showed up and it did, by some bizarre manufacturing error, fit. It is a lovely purply shade of red, it's got two textures in it and I don't know, it is sensible enough such that I probably could find some excuse to wear it between now and the End of Days. It is called a Matt & Shine dress and is from Marks & Spencers. It's also the cheapest out of these at £55. So I think practicality won the day despite myself.

Debenhams probably have the biggest range of dresses, including an entire section of red ones. Also, if you are a funny shape and did want a party dress, you can "design" one and get one made in the UK through somewhere like StyleShake which I've never used but looks like a great idea.

I don't think shops will mind me pinching pictures for the purposes of admiration, but I shall merely link to what is by far the ugliest party dress I have seen this winter. It is leather. It is gold. It is pretty much without shape. And it is £175. Any positives? Well, I guess could easily be wiped clean...
Posted by The Goldfish at 1:10 PM

This bit of 'satin frock' does it for me!:

Sigh. Not even I would wear the gold thing... I was all excited about it... gold? leather? yummy. but that's ick.

And anyway.... what happened to recession fashion, the absence of luxurious conspicuous consumption.

StyleShake is not just a great idea... they make amazing dresses.

First Anonymous - see, if you call me "Debs" on here, that kind of removes a lot of that anonymity. But yes, Rita Hayworth is very lovely.

WcD - I'm not sure whether the recession has hit fashion like that yet - at least not among the sort of people who buy posh frocks. You know, I may have said this before but you are by far the most glamorous woman in my acquaintance; certainly the only one who could wear something that was both gold and leather.

Second Anonymous - Thanks for your recommendation. If I do ever need a dress, I shall try them out.

I am very fond of the Boudicea dress. I actually miss window shopping for dresses, so this has been an extremely fun post and I hope there will be more in the future. You could do a 'designer vs ebay' feature...

Wipe clean, eh? Every cloud has a silver lining.

Confession: I own a dress from Monsoon - and the matching wrap. I'd gone in and adored it countless times (while ignoring the three-figure price tag) and it's SO pretty.

And then it was in the 70% sale, in my size, and I tried it on, and it looks GORGEOUS, and so I may have slightly... bought it. I've owned it for two years now and never worn it except at home for my own satisfaction.

Thanks Stephen, there's nothing wrong with window shopping for dresses whether or not you'd actually wish to wear them yourself (although, you never know, I think blue might be your colour ;-) ).

Mary, I alas have never possessed anything from Monsoon, but I do like to go there and feel the dresses. I bet you look lovely in your dress. :-)

Particularly enjoyed the second post about euthanasia, but more importantly, I just bought this Very Silly (and quite expensive, eep) dress for my work Christmas party and new year's eve.

I hated it when I unwrapped it, but loved it when I tried it on - hope I don't look like I forgot my armour!

Elle - thank you and congratulations on a very nice dress. The word hot springs to mind - hope you have lots of fun wearing it.

1 is something I would wear if I were a concert violinist. 2 is a classic for any woman in reasonably attractive physical condition. Love it. I have to say, though, that in spite of the adorable, fey, kind of Audrey Hepburn vibe the designers have been rocking with this and similar silhouettes for the past SEVERAL years, I am mighty sick of the pregnancy waistline, which is what the Empire waistline looks like on anyone who isn't a sylph either by nature, art, or tons of gym work.

You know what might be very useful, and that I would love to see? A fashion show -- and a real one, not some prurient interest thing -- of beautiful dresses modeled exclusively by women in wheelchairs. I remember Agent Fang once wrote about trying to find a dress, and about how there are "rules" for such things when one sits down all the time, but I never found out what they were, and I, as a sometime wheelchair user, would very much like to know what they are.

It couldn't be fantasy fashion, though; that would spoil the point. I want to see real, practical, wearable, but absolutely beautiful evening wear for women in wheelchairs.

Guys always look good in a tux, IMO, wheelchair or no. But when you are going to spend an entire evening sitting in a gown, where does all that fabric go? And how do you keep it from getting caught in your wheels or spoiled by nasty things like slush in the streets?

Have we talked about this already and I forgot? If so, sorry.

Sorry; small fit of dyslexia which I only realized hours later while sitting on the couch watching The Many Adventures of Winnie the Pooh with my true love. I meant to discuss dresses 3 and 2 (in that order), not 1 and 2.

Your continued patience is appreciated. :)

Sara, Thank you and no problem. I think we have talked about this before, but the point remains a good one. And yes, I agree about the "pregnancy look" and empire lines.

I now know someone who might be able to help us with this so I shall have a word and see if we can't compile some tips from both experience and expertise...