Alexander can now name most of his family and friends. He can cope with polysyllables; for example, there is a little boy at his childminders' who is known as Baby Luke and he can say that, no problem. His Grandad sounds very much like Gandalf but I think this may be a satirical point as opposed to mispronunciation.

But he cannot say my name. For the purposes of this post, you have to know that my off-line alias is Deborah or variations thereof. And to begin with, Alex appeared to make an asserted effort, calling me something like Dib-dab, which is close enough. I would be quite happy to be Auntie Dib-dab indefinitely. 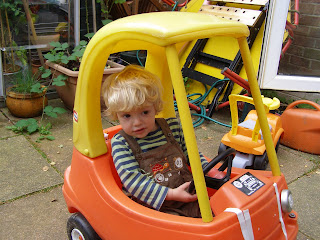 Then one day, about six weeks ago, Alexander decided to give up and call me Bum.

When he first came out with this, his mother corrected him.

So I thought he was just messing about. Only Rosie and I had a chat about other things, and when she said goodbye and asked Alexander to do the same, he said, very tenderly, “Bye bye, Bum.”

Then the next time we spoke, when Rosie asked him to say hello to his favourite auntie, Alexander greeted me with, “'Ello Bum!”

Which I guess at least proves consistency. Once again, Rosie corrected him.

I did ask and no, he's not calling anyone else that - it is just me. And so it continued. But then last night, there was a change. When I was talking to him on the phone and I asked if he could say my name, he cried

I'm yet to decide whether this is an improvement.
Posted by The Goldfish at 10:55 AM

Oh dear. You don't want to be Auntie Bummer. :D He's adorable. And I see he's got the mirror-signal-manoeuvre thing going correctly. Well done him!

I owe you an email. I'm very behind on everything at the moment! Haven't forgotten, honestly.

I guess some boys grow up to be tit men and some to be bum men...