You can take me where you will, up the creek and through the mill

Sometimes in life, we rely too heavily on directions and forget to examine the map. It's not until we find the road ahead to be blocked that we realise that not only are there two or three alternative ways of getting to where we were going, but there are all manner of other destinations which we might consider heading towards instead. However, in this modern age of Sat-Nav (and indeed before then for other reasons that this metaphor flounders over), it can be very easy to forget that there is a map in the glove-compartment at all. So you sit at the roadblock and weep. 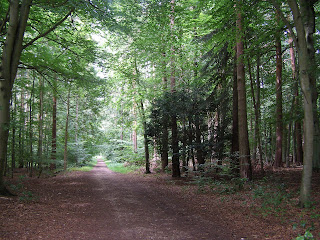 Every time things change with my health, I tend to panic for a while before I remember to do what I have always managed to do previously. More than panic; it does cross my mind that this is it, that this is one obstacle too many and I've gone as far as I'm ever going to go. This seems incredibly melodramatic in hindsight, but I never learn.

Because whilst there usually are several unexpected paths to take, not everything is possible. I can't learn Judo or the Tango (both of which have always had some appeal, oddly enough) because all the conceivable routes to those things are blocked. If I am able to work for a living, then I am yet to discover that road; it's either very well-hidden or may involve taking a short-cut across a field (hmm, I hadn't really thought that one through).

So it's not totally irrational that I despair; if I cannot see it, it might not be there. But past experience suggests it probably is. I just need to study the map again.

Writing is a deeply unsatisfactory exercise just now. The windows in which I can work are extremely narrow and infrequent. Some days there are none and some days there are very few; things are getting better but there are still days of thick white fog. And how much you can write or edit in five or ten minutes doesn't really seem worth it. You lose your mental thread between times so it can take several of those minutes to find your bearings. And then it occurs to you that those four or five sentences weren't particularly good so in frustration, you delete a day's work. That's if they're actually there at all; if you timed-out at the end of the last session, you might well have closed up without saving. Which is a bit of a bummer.

But it is a very simple choice; either I wait until my health is good enough such that I can churn words out for much longer periods at a stretch or I find a way to make it work now. That way it happens slowly, but it happens. After all, at some much earlier juncture I had to accept that I couldn't write all day without very many significant breaks. And everyone has to accept that whatever they're doing, however much they are into it, sooner or later you need to eat, sleep and have a bath.

A particular bugger if bathing consumes almost all the energy of one day. But then you can always wash less often.

So I guess it'll have to be one sentence at a time, sweet Jesus.
Posted by The Goldfish at 4:09 PM

This is why I like the six-word story exercise, actually-- the idea being that you allow yourself to focus your efforts on one line, rather than trying to crank out 50 or 100 when you know you don't have the energy, or the writing momentum, for it. Granted, the result may not seem like much (and one line certainly won't get a novel written on its own), but at the very least, you'll have spent ten minutes exercising the right muscles. More to the point, the resulting line can spark something else which will contribute to a larger work. Take one of your characters from your novel, say, and put that character in some small situation, be it part of a scene you've thought of ahead of time, or just some small action, which you can narrate in six words (or a sentence). Stick with that moment and play with the sentence for ten or fifteen minutes till you have something that feels right for that character, and their story. Then save it and leave it alone for a while. Go back to it in a day or so and try using it as an opening line-- add another sentence or two, give each of those sentences the same amount of attention, then leave it for a few hours again.

Now obviously it'd take forever to write a whole novel that way. But the point of the exercise, I suppose, is to train yourself to approach what you're writing a little differently. It's okay-- it really is!-- to write one sentence at a time. A lot of writers work that way anyway; I know I do. I find writing fiction much easier when I treat it like stringing beads (as my friend Jen put it recently) as opposed to driving toward a point on a map. I write best when I don't worry about length; instead, I start with a line, then play with the line till I have another line, then another. Most of the time I don't really know where I'm headed till I look back over what's there-- and I only do that when I'm sure I don't feel like adding more lines.

If I've learned anything in trying to finish my own novel, it's that fiction calls for being in a different sort of headspace, and a applying a different sort of mental energy, than writing essays does; the ease with which it comes varies from writer to writer, even in the best of cirumstances. I think you're right that the key might be to let yourself work for very short periods, then return to things later on. Let yourself write when you can, as little or as much as you can, without troubling yourself over length or the worth of each line. More importantly, don't delete anything. Save it and then go away for a while. What's important is not how good a piece of writing it is seems begin with-- it's whether what's there interests you enough to continue adding lines when you feel up to it again. It's honestly fine to work that way; you can always go back and change things later. :)

Meanwhile, I saw this today and wished I could get you one. That'd nip that muddy-park-trail issue in the bud. As well as any gangs of loitering youths that happen to get in your way. Vroom! Pow. Squish.

You are who you are ...and that is what shines through all the health related junk. It is true that each loss seems a step too far. But it is OK to mourn the grief of unacceptable loss ( to borrow a self-help book phrase).

I sometimes go back to the techniques they tried to teach us at school...

1. Open up a notepad file
2. Write some headings. Could be as simple as "beginning" "middle" and "end", or it could be a bit more "hypothesis" "arguments for" "arguments against" "research" "conclusions" depending on what sort of thing you're aiming at.
3. Shove in a few bullet points under each heading for things you want to say, analogies you want to use, etc.

Okay, so that's ten minutes, roughly, and you've got nothing that looks like anything approaching a blogpost. But, if you then go back in and work on one bullet point at a time - while keeping the main point you want to make on the screen in front of you to dissuade you from waffling away from the point - it's do-able.

Also, you could keep a pot of Vicks by the door, and anyone who objects to your bathing regularity may wipe some on their philtrum.

Ditto. I don't have any great wisdom or insights-- just slog away, and don't throw anything away!

You may also want to consider some form of dictation, if that works for you. Even MP3 players can do some tape recording or you can use a voice activated machine...

My two cents from across the pond!