Mother says I was a dancer before I could walk 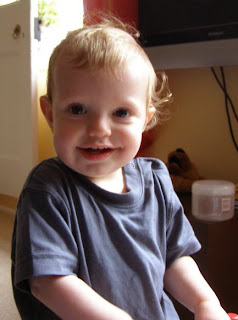 We spent much of Sunday with Alexander and my folks, which was nice. He wanted another nine re-reads, in groups of three, of That's not my Robot and seemed to find it more amusing every time. But he loves to dance, above all things. This is really quite curious. Very early on, R observed that he would smile and wriggle about whenever he heard music and you just need to sing him a song, even an improvisation, and he'll start jigggling and waving his arms about. He has various toys which play awfully tinny tunes and he loves to set them off, dance, then set them off again as soon as the music stops.

This can't be unique to Alex, although he's probably been exposed to more music than the average baby. And it can't be purely immitation; he'll have seen his Daddy conducting choirs, but it seems unlikely he would be quite so obsessed with this behaviour. It's not a performance thing either, as he does it when he doesn't realise anyone's looking. So it's something qutie basic and wonderful.

In other news, we finally got the piano tuned. It remains a quarter of a note out, but it is at least now in tune with itself. Meanwhile, my health seems to be gradually picking up again.

Thank you very much to whoever sent me a card. It was very much appreciated but since it wasn't signed and it was posted somewhere I don't know anybody, it has created somewhat of a mystery...
Posted by The Goldfish at 1:17 PM

I learned the piano as a child. I hated the lessons but am so glad I did learn :-)