You were dressed in pink and blue just like a child

We received our first Christmas Card last week. Admittedly, it was from the National Trust, so it doesn’t really count but it’s quite pretty and I’ve put it on the shelf. And I must confess, I have started Christmas Shopping. As I have to draw it out like this or else it won't get done. 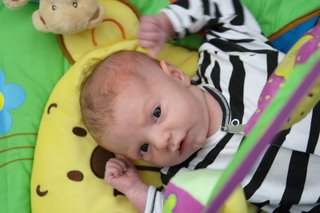 The first person I shopped for was Alex, my unworthy nephew. He is unworthy because, whilst on the phone to my sister, I asked if he had any messages for me.

"Do you have any messages for auntie Goldfish?" Rosie asked him and the child simultaneously and very loudly passed wind from both ends on cue.

So it's clothes for him this Christmas. Here he is wearing his zebra outfit that I chose for him (no, he is a zebra, not an escaped convict). So I guess you're all wondering what is hot and what is not in the world of miniture fashion? Well, never mind, but just in case...

Well, as with adult fashion, animal-prints are the new polka-dots this autumn. To get Alexander's look, buy the precise same sleepsuit which came in a zebra-themed three pack for £10 from Mothercare. Or for the baby with a conscience and £40 to spend on something he will grow out of within a few months, there are these outfits at Cheekaboo, which sells fair trade baby clothes. 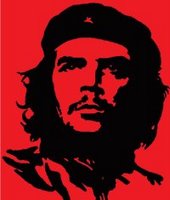 For just £11.99 Toerag Clothing sell such essentials of youth as Che Guevara baby-grows and t-shirts up to four years old. Up market at 12.99 Nappyhead sell t-shirts for baby with various amusing slogans such as Sleep is for the weak and I only cry when ugly people hold me. 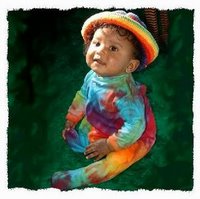 However, by far the best place to buy shop for the discerning baby-about-town is both fair trade and not painfully expensive; Su Su Ma Ma Worldwear. Take this picture on the right. With such an outfit, the little gentleman would still look as good whatever milk-fuelled mayhem he got up to in it. They even have a section for the Goth baby. My personal favorite is their batik Starchild range, and I am keen to get Alexander one of their pixie hats - the child can't grow up without any embarrassing photographs taken of him.

Blue was considered a feminine colour on account of the fact that the Virgin Mary was traditionally depicted wearing blue. Why was she wearing blue? Well the best way of making blue (or more accurately ultramarine) tempera back in the Middle Ages was to use Lapis Lazuli, the semi precious stone. Naturally, crushing this up to make paint was a very expensive business, so blue paint was used very sparingly. As such, when the nativity and other scenes with Mary in them were painted, they would save the blue for her cloak, since she was the most important character.

For some reason, this all turned around in the twentieth century. I'm not really sure why. And this wasn't the case in all cultures either, of course. I understand in some Asian cultures, little boys have long been dressed in blue to protect them from evil spirits, although little girls (the evil spirits being welcome to them?) have not had any particular colour associated with them. Other cultures, I daresay, don't colour-code their babies at all.

There have been some studies which appear to suggest that men and women, boys and girls are someone naturally more receptive to different sorts of colours. Nobody can escape the way that pink is used in marketing to grown women. These two incredible shops are pretty extreme, but it's all around us.

But as I said to Rosie, take young Alex. He doesn't own anything pink. He has been surrounded by blue things and dressed in blue from the word go (this isn't anyone's choice; there aren't too many choices besides pink and blue). Thus even at this young age, where he still has no concept of sex or gender, Alex would probably exhibit a preference towards blue objects as opposed to pink or red ones. At just six weeks old, he will already associate the colour blue with something about himself.

And yes, I'm sure this is all entirely superficial and nothing to be concerned about. But given that we do this with colour, it is easy to see the way that step by step, drip by drip, gender is constructed.
Posted by The Goldfish at 1:36 PM

You do realise that the passing of wind is of course a compliment from someone who hasn't yet learned his words. It means he is relaxing when he hears the mention of your name. With two puffs of contentedness, you should feel honoured!

Colour isn't quite as bad as frills...

I firmly believe babies should be nice and warm and comfy in babygrows, and then once they're a bit too big for that and exploring the world, dungarees.

Most little boys get this.

A number of little girls I have known, however, have spent their short lives to date being dressed up like dollies in fluffy frilly delicate dresses. Their mothers then look surprised or dismayed when these impractical clothes, on being stress-tested by a toddler exploring the world, get torn and damaged. In fact some of them are more put out by that, than by their daughter tripping over the hem of a dress and landing flat on her face.

Indeed. It's like putting ribbons and bows around a baby's head before she has grown any hair at all. Different colours, patterns and textures can be useful for a child, but practicality is key. Babies are pretty cute as it is without needing to beautify them further.

Certainly, Alex is not ready to dress as a little man yet - as you can see from this rather distressing picture