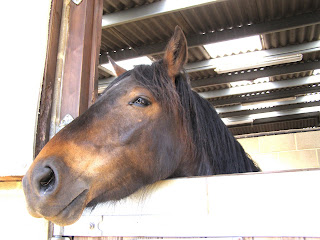 It's been a very busy week by my standards, with not one but two adventures.

Yesterday, my Dad and I went to Snetterton, famous for its racetrack, but also home to World Horse Welfare, which is a place that looks after retired police horses as well as variously injured and abused horses. Dad, who had never sat on a horse until a few years ago, is now studying for an NVQ in Horse Management, so this was a bit of a field trip. I learnt the difference between a bay and a cob, which is a pony, where are the withers and all manner of horsey facts. 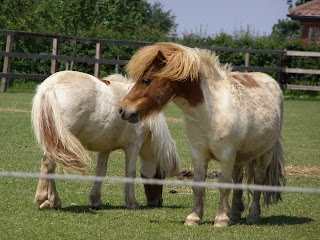 I attempted to steer the conversation round to the sociological nuances of man's relationship with the horse, horses and socioeconomic class and the symbolism of the horse in psychoanalysis (e.g. the case of Little Hans, whose phobia of horses was used as evidence the Oedipus Complex).

However, the horses were very nice. Although clearly there is a whole world of horsiness which I shall never understand; for example, we saw a few horses in fancy dress, including one pony dressed as a Frenchmen with stripy sweater, a beret and onions round his neck. That can't be healthy, surely? 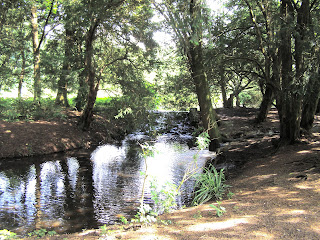 On Thursday, [...] and I went for a walk at a place called Lynford Arboretum. There were lots of weird and wonderful trees there, as you might expect at an arboretum, as well as some very pretty bits of water with geese, ducks and swans. But especially geese and their goslings; loads of them.

It was the second crowd of Canada Geese we'd seen that day. Canada Geese were introduced to St. James' Park in the 17th century apparently, and whilst they are rather common now, they are very beautiful birds – much nicer that ordinary geese. 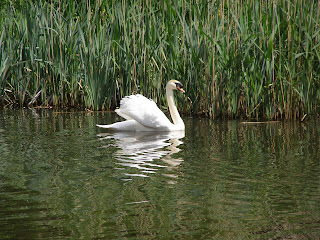 We also saw a swan doing a sexy dance, a twite, two deer and a pair of Jays, which is a rare site indeed.

In other nature news, we were having tea at my folks' house when I spotted a pair of squirrels doing the dirty on my parents' fence. I've never seen squirrels mating before; I imagined they were private creatures who needed shelter and soft lighting. On a fence in full view of the dining table seems both precarious and exhibitionist. But I didn't have my camera with me and if I had, I'm not sure I would have liked to add to their illicit thrills by taking pictures. 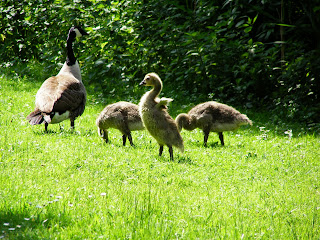 We've also got a hedgehog in our garden. I've seen him or her in his or her nest during the day, but we're now keeping the look out for a night-time encounter.

All these pictures are a bit muddled up, I'm sorry, but as you can see, I've been getting out and about rather more than usual this last week and all the excitement has adled my noggin.
Posted by The Goldfish at 11:15 AM

Those are excellent adventures! (Duuuude. She said, channelling Keanu Reeves for no reason in particular.)

Horses make me nervous. Shetland ponies are all right, but horses proper: you just can't tell what the buggers are thinking. Well, I can't. My knowledge is rather lacking in the area of Horse Psychology. I know they enjoy apples and carrots, and that certain of them love being stroked on the nose whilst others completely resent it. Fair enough, I suppose, considering that I'd feel a bit resentful myself if a stranger came up and stroked my nose. But how else is one supposed to say hello to a horse, when she encounters one? Especially if she has no foodstuffs to offer?

Why the hell would anyone introduce Canada Geese?! The dang things are like giant mutant pigeons.

They're all over the place around here, hanging out in the parks and business' retainment ponds (built to hold excess rainwater from paving runoff), crapping all over parks and lawns et cetera.

I thought the same thing about the Canada Geese. They are all over the place here. I would say that they're a bit more attractive than a giant pigeon might be, but I see Adrea's point. In Vancouver, they have a special crew at the Parks Board that goes around shaking the eggs in the nests just to keep their population under control (somewhat). If they've been in England this long and haven't completely taken over, I think you're safe!

Hedgehogs, on the other hand...

Jess - Bodacious. My Dad's strategy seemed to be to offer a hand to be sniffed, rather as you're supposed to breath on a dog. But I know what you mean; they are rather gormless, but as I understand it, the only real harm they can do is throw you off when you are on one, or kick you if you stand behind it. They are grazers, so I don't imagine they've got much bite to them...

Andrea - well, as you know, we haven't exactly got a great track record with introducing organisms to places they didn't exist before, but I guess they seemed exotic at the time.

Donimo - culls are another thing we don't have a great track record on. In Whitby where I used to live on the coast, they once gave the seagulls a poison - but to make sure no pets could be harmed, they made it fairly mild. It was, in fact, so mild, that the gulls simply became drunk and started flying into each other, buildings, cars and people...

Incidentally, there is an island off the West Coast of Scotland where they have too many hedgehogs and the hedgehogs are interfering with ground-nesting birds. Meanwhile, having supported recovering populations, there are now too many sparrow-hawks on the mainland, threatening the sparrow population. I suppose it was only a matter of time before someone suggested hurling the hedgehogs at the hawks...

Some whit decided it would be cool to have all the birds mentioned in Shakespeare in the US, so they released a few Starlings, and now they're endemic in North America. Sheesh.

Regarding the hedgehogs, i'm surprised someone didn't come up with a bumper sticker or the like with the saying, "Save the shuttlecocks, play badmitten with hedgehogs".

Was it a lesser-spotted twite...?

You know it's about three days since Lady B left that comment and I've only just got the joke... #-)

I don't get it. But you beat Springwatch hands down. Gets on my nerves that programme does.

Oooo, sweet horsie faces and shaggy ponies! Fuzzy goose babies (yes, yes, I know; goslings)! Yay! And what could be better than a week including all this and greenery, too? Nice one!

Squirrels are very, very athletic. I imagine -cough- vanilla would bore them.