A little sparkier today. At the weekend I was tagged by Diddums for this Booky Meme.

Some. No really, I guess about 300. I attempted to count them, but not only is this a very difficult task for me just now, but our books are all mixed together and I shan't lay claim to books about PHP, Fedore Cor 6 or Apache Redhat. So I guess about three hundred are mine, which doesn't strike me as too many, but I tend to recycle (give away or sell) any that I have read and don't want to keep for reference or rereading.

The Consolations of Philosophy by Alain de Bottton.

I've just started reading this now, it is very good so far. I do like Alain de Botton. He is a rare individual writing about philosophy today who does not either ascend up his own intellect nor descend to fluffy vagueries. It's practical philosophy, but philosophy proper; exercising reason in order to understand our world. Anyway, I haven't finished this book so it might let me down half way for all I know.

The Attack of the Unsinkable Rubber Ducks by Christopher Brookmyre.

Christopher Brookmyre is another hero although for completely different reasons. The one living author of whom I have read every single book. I usually wait for the paperbacks but after Jack P went to a book signing, and out of sympathy for myself (which would be, uh, self-pity) I treated myself.

The book is about a formal experiment to see whether or not the claims of a famous and controversial medium are valid. If they are, this could change everything about the way that science is understood. If they're not, then how is the guy pulling it off? Naturally, there are dead bodies and political intrigues along the way; it's very good.


Five Books that Mean a Lot to You.

Tried to think of five I haven't sung the praises of before now, but as I'm tired and rambling today, I'll cheat and give you three. Having mentioned the guy already...

1. Quite Ugly One Morning by Christopher Brookmyre

Picture the scene; it's 1996, the scene is Rosehill Library in Ipswich, I'm fifteen years old and I've decided that I will never be able to read for fun ever again. I like mysteries and adventures but most of these books are rubbish. Not because I'm fifteen, but because genuinely, most of them are rubbish and I have developed a very low tolerance for pretension and cliche. 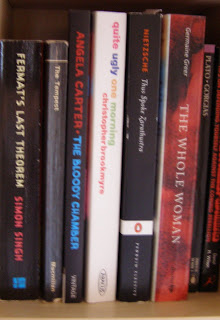 So I'm staring at the black and red spines of the Crime & Thrillers shelf (it's not a very big library). I tried to give you a pictorial reconstruction of what I saw, but the red and black books I own aren't really the sort of thing. You have to imagine they all have faintly sinister titles like Satan's Earlobe, thriller titles such as The Mortage Indemnity (you know, the one about Jason Mortgage, who has forgotten who he is but the CIA are trying to kill him all the time?) or cryptic titles such as Dying for a P.

Come on, you have also read these kind of books; you too know they're shite. In any case, Quite Ugly One Morning stood out a mile. The first line was 'Jesus Fuck.' which seemed to bode well. And this book became extremely significant, not because of any profound content (there isn't any, it's really not a great book and if you can read the first chapter and hold down your breakfast, you're a better man than I'm not). But it is very funny, but without losing the dramatic tension. It is extremely graphic and gruesome, but... well one day I may bore you with my theories of disgust, but suffice to say it was within my tolerance. It is also an adventure story involving fairly ordinary people and places, if rather extraordinary circumstances - which to me is the best sort of escapism.

Not only did Quite Ugly One Morning restore my faith in reading fiction for fun, but it also showed me that people can write new books. I mean, like I say, nothing profound, but the way Brookmyre writes is unique - something you can't say for a lot of writers, even the most popular. I think until that point I had imagined that story-writing required a great many more conventions than the beginning-middle-end rule.

When I was a kid (very nostalgic this Meme; I'm still in bed), I was a tomboy and a bright one and thus was perfectly aware that the way that boys and girls, men and women were regarded and treated was completely unfair. Then I had my Teenage Angst and began to suspect that my entire sense of injustice about sexual inequality was just me; perhaps if I was a proper pink ladygirl who didn't fancy girls, it wouldn't be a problem. I didn't seek out feminism texts and when I came to de Beauvoir via her fellow existentialists, The Second Sex was a tremendous relief; it wasn't just me after all!

I can't recommend this doorstop as an introduction to feminism, although written in 1949, it can probably be considered the first ripple of the Second Wave; i.e once most Western women had or were just getting the vote but still very unequal rights in employment and marital law. But regardless of the content, she's just so smart; like any great polemicist, you kind of forget your are reading arguments which you might want to question and get completely carried along with the woman's passion. And much less self-absorbed than her lover, Sartre.

Crime and Punishment was the first book I remember reading which explicitly asserted that there are no good people or bad people, only good or bad behaviours. This is much easier said than believed and I hadn't really bought into it before then. There were things, for example, that I would never do, never ever do. I guess I took what is a fairly dominant idea that in order to do something really bad, to commit rape, another serious assault or murder, one has to have something missing. The language of - if not the explicit assertion of - mental illness is frequently used and abused when we talk about violent crime.

But I read Crime and Punishment during a spell in bed, and in my literally feverish state I was completely carried along with Raskolnikov, I felt his poverty and frustration and I realised that I would have taken an axe to the miserly old biddy given half a chance. I too had the mind of a killer!

Having a taste for detective stories, I am always baffled by the delight some authors seem to take in present the most unhinged, eccentric murderer one could possibly dream up. I have read so many books and sat through so many movies, stuff that seemed serious and intelligent throughout, right up until it emerges that it was the Generic Crazy Person what dunnit - worse, the Generic Crazy Person who cackles during their confession.


Anyway, three is enough for me for now. I tag S., Elizabeth, Sara, Sage and anyone else who wants to do it.
Posted by The Goldfish at 1:35 PM

Crime and Punishment? I couldn't read more than 50 pages of that in high school, but maybe I can try again.

Horaay, I'm tagged - quite honestly Quite Ugly one morning sounds like a Great book to me. I will look it out.

Aha, some time ago I deleted my blog and started again, thinking I was using the same URL, however "Ramblings" now takes one to somewhere else and http://nobbysramblings.blogspot.com/ Doth take one to me.

I only posted that because I seemingly am lost.

My library is a bit strange, mainly an eclectic lot of art books, seeing voices, a Journey into the world of the deaf and really some interesting stuf which people voer the eyars trying to encourage me to write have sent me.

Heck mehinks I had better go make a posting on my blog.

Well, you mentioned me, you bought a book that I talked about and I was looking for a meme, so I'll consider myself memed with that one.

It'll probably be next week though...

...Oh, and one of the bizarre things about being a regular blog reader is that you find yourself wondering how well you actually know the person.

For example, I've never met you, or your family, yet you seem very familiar to me, and I occassionally have to stop myself saying "oh yes, the Goldfish was saying that just the other day" so people don't think I'm weird(er).

Does anyone else experience this, or is it just me?

David - it's worth another try, I think. Not for everyone, of course.

Elizabeth - yeah, I think you would appreciate Quite Ugly actually.

Ol Nobby - I know and I've been reading you there, but I've been very slow adjusting my blogroll. Done now, sorry about that.

JackP - that's cool. I hate tagging people as you have a limit.

And yes, I get that often, but I am rather unashamed in my weirdness. If I'm on the ball I'll sometimes say, "A friend of mine..."

I have no idea when I will get to this, as I have much backlogged material to blog and also my life became a lot more complex this week, and no it's not just the cat. But I will do it, honest.

Meanwhile, I have to tell you my Crime and Punishment story. I started reading it in high school, under protest, got five pages in, and never went further. Do you know what it took for me to finish it? Getting my leg cut off. It's like some kind of joke based on something a teenager would say -- "You'd have to cut one of my legs off before I'd sit still long enough to read that" or some such thing. But truly, sitting around recuperating from that exact experience, I actually finally got around to finishing Crime and Punishment (which I had promised someone I would do so we could talk about it intelligently) and was surprised not to loathe it after all -- though I certainly won't be rereading it, no matter how senile I get.

I was perplexed that I did not sympathize with Raskolnikov as a killer, not in the least, but nevertheless found myself pulling for him slightly anyway. What's up with that?

Once again I am relieved to not be tagged.

I don't have the energy right now to research and compile a list of Weighty Tomes, Worthy Works, and Obscure Yet Meaningful Explorations Of Issues. So I'd have to admit that I enjoyed The Da Vinci Code. And then I'd never be able to show my face on the internet again.

I love Brookmyre too. He is very witty, sick, swears a lot (the c word is used liberally) and inventive.

He is my favourite British author and Goldfish is right "Quite Ugly One Morning" is not a great book. Most of his others are far superior, but as a first novel it makes you look forward to his next one. And that is a very good thing.

Hey, reporting back that I have finished my assignment - wow, does that sound such like a keener turning in their book report?

Give me a week or two on the tag--snowed under at the moment, but this is a good one for me.