String and Sealing Wax and Other Fancy stuff.

Back home, I am rediscovering the utter tedium that is Christmas Shopping. Last year I made most of my presents so I didn't have to face this. And of course, it wasn't at all tedious earlier in the autumn when I was dealing with my good ideas presents; seeking out things which I was confident that my donees would like and appreciate. But now we're down to those people who possess very few passions or interests in life, but for whom a novelty tie would be an admission of defeat.

There is so much useless tat about. There are now two dozen on-line shops dedicated to gadgets and novelties which are amusing in concept but which you know would be lost at the back of a draw before New Year. Most of it is so dear. And yet, we really haven't sorted the ettiquette of getting charitible gifts; planting trees, buying goats, wheelchairs etc. on other people's behalfs. It is quite different if that is something someone has asked for, but if not, is it really on?

I have had at least some luck. The present I am most chuffed with is a custom-made stamp for making wax seals and a load of coloured wax for one donee who doesn't do e-mail. If you're going to live in the seventeenth century, you might as well as do it with style. And purple wax. 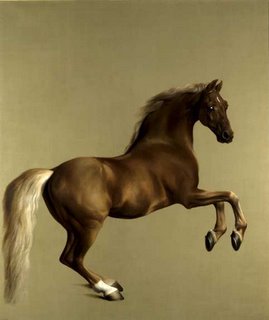 I must also recommend the National Gallery Shop. I think I mentioned the Create Your Own Calendar facility last year, which I think is great. They also have a collection of Hieronymous Bosch figurines - all the surreal characters from Hell. Some of their art-inspired items are less convincing. Take for example, the iconic Whistlejacket by Stubbs; not my cup of tea, but it is a pretty amazing painting.

And here is the specially commissioned soft toy which claims to represent it. Can you see the likeness? Can you any connection between that painting and this item apart from the fact that the painting features a brown four-limbed creature and this toy apparently has four limbs and is brown?

Perhaps almost as bad is the "Pop-Up Sunflowers", after Van Gogh...

The Tate has a shop too, but it's very much dearer on account of the fact that many of the artists in their collection are still living.

And then of course Amazon is great for most people - unless they don't read books or listen to music. Or if they do, but they can never muster enough passion about books or music to make it worth me finding something for them. Which is the case with some of my donees.


Important tip to men buying gifts for women; if you look in a shop on-line and it says Gifts for Her, don't get anything from there. Gifts for Her consist of anything which is shiny, smelly, slimey, pink or made out of chocolate - and often a combination of the above. Many women do like gifts with these attributes, but there are generally better sources, places where the packaging is worth significantly less than the item; try to buy shiny things from a shiny shop, smelly and slimey things from a smelly and slimey shop and chocolates from a chocolate shop. Pink things for the over-14s? Use your own discretion.
Posted by The Goldfish at 5:32 PM

I thought this flexible laptop mini-desk looked quite Interesting. Good for if you feel like blogging immediately after a snooze. I don't have any experience of the reseller though.

I can just imagine the Christmas Day conversation:

"Oh, what a wonderful gift, darling! Wherever did you find this?"

"In an online slimy and smelly shop."

Tidings of comfort and joy?

That horse made me chuckle! Total rip-off, isn't it?

A lady of refinement I once knew, said that her (third) husband had the sense to know only to give a lady a gift she could wear; perfume (the smelly slimey stuff), jewellery (from the shiny shop), silk scarves, designer shoes, handbags, clothes, furs ...
Another era, another world.
I would love the laptop stand Bunnyman found - any importers out there ?

Goldfish, I forgot to say, so glad you had a wonderful time doing lots of wonderful things, and the Disability Blog Carnival 4 - thanks for that, excellent.

Thanks for the "Pink things for the over-14s" line. Never been a girly girl, but SO MANY people think pink & girly means that every woman must love it.

Thanks for the link to the National Gallery's shop. It's a wonderful museum shop. Great for the art lovers in my family. I recommend the Smithsonian Institute store - http://www.smithsonianstore.com/. Lots of great gifts.

I love Bosch! What I truly need though are Bosch designs on t-shirts so people ask what they mean I can explain that it's how I feel during my doctor's office visits. :)
Those figurines are great.

Sally - there are importers of similar items on eBay (search for laptop desk). They're all shipping from the Far East so far as I can make out, but the feedback ain't bad...

Unfortunately I couldn't find any UK importers of the laptop stand. The eBay auctions are for a slightly different design. There are a couple of (U.S.) based sites with desks here and here. I've seen bed desks in the UK similar to that in the second link, but can't find UK suppliers on the net. It's most annoying!
An alternative stand design seems to be available from a Cambridgeshire source on eBay for around £40 although it's not as flexible.

If you know any handymen, this site describes how to build a "In-Bed Notebook Computer Desk on wheels". To be honest though, the detailed pictures available for the typical eBay desks are just as useful. It's a shame eBay aren't selling handymen just now because they really are quite useful people.

That is really useful, thank you, it sets me off on a quest. In the absence of handymen, the retired engineers and such like at www.remap.org.uk might be helpful, except you have to be 'referred' by a health care professional - in case any old crip would dare to ask for their expertise.

I used that online smelly and slimey shop for some gifts last year, and I have to say the experience was terrible. Even once I'd navigated their horrific buying-online procedures, they then failed to send me a confirmation email, so I phoned up and asked about the order, and was told that it would be several weeks before it arrived but "hopefully" it would get to me before Christmas... then I was out the day it was delivered and the nice note from the delivery people said that I could come and collect the package from their depot (depot 25 miles away and on an industrial estate where Buses Do Not Go). So I phoned the delivery people and they agreed to redeliver it on a set date "at some point between 7am and 9pm"... When the package turned up there was an item I had been billed for but that wasn't in the package, I couldn't get through on the phone so I emailed them and they never replied... I gave up. I wasn't going to let their incompetence wreck my Christmas Cheer.

It's possible though, that I have just been spoiled by the efficiency of firebox.com, who even in mid-December were managing to get orders dispatched same-day and putting free sweeties in the box (which I think is a marvellous idea).